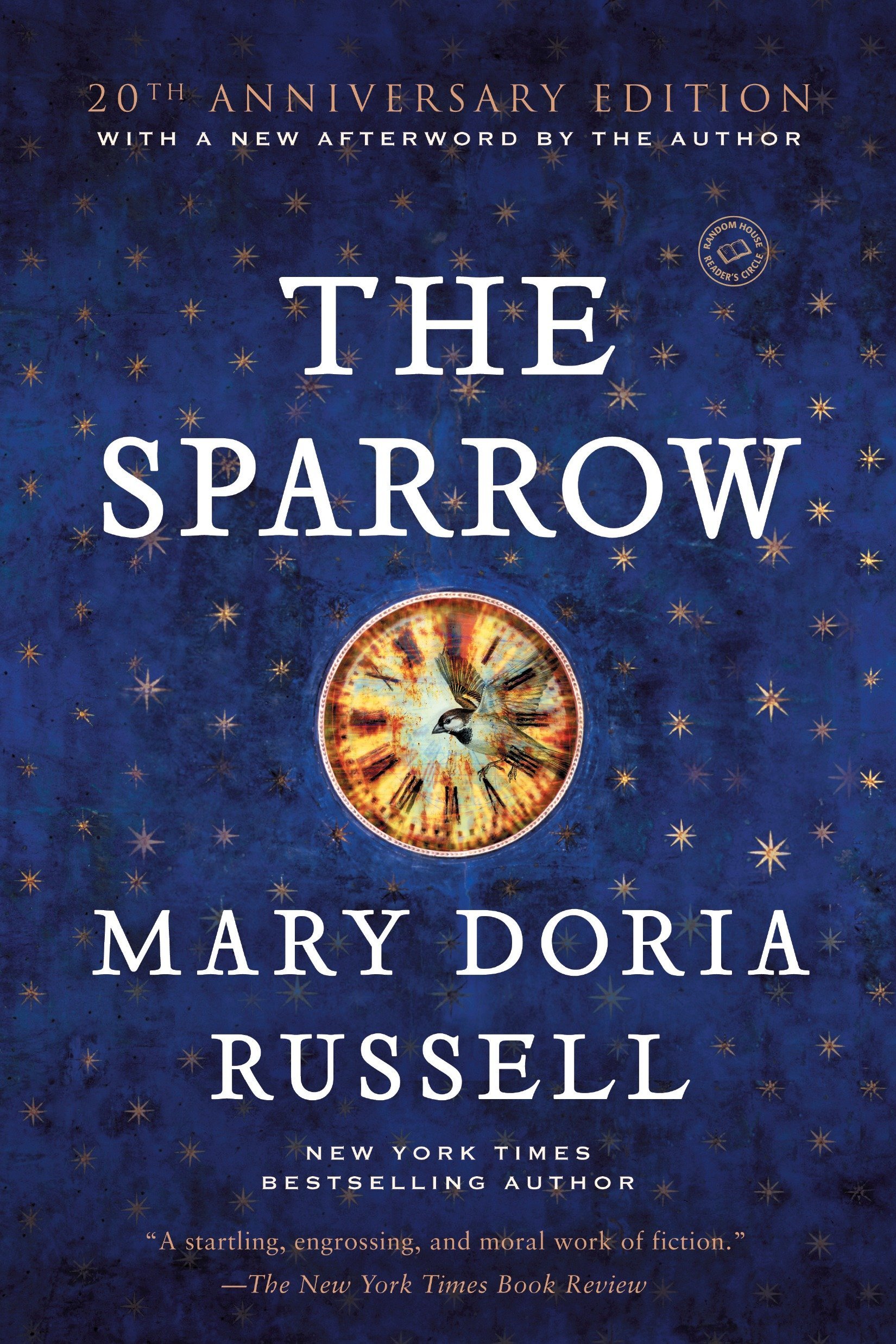 The Sparrow is a book that left me with a lot of conflicted feelings. I’m glad I read it and I have enjoyed it immensely, as much as one can enjoy a tragedy. But would I recommend it? I’m honestly not so sure.

I have a huge weakness for stories with a mystery at the centre, where we know the ending, but not the how and the why. It intrigued me right from the start. The story is mostly centered on Emilio Sandoz, a Jesuit priest and linguist, the sole survivor of a first contact mission gone horribly wrong. It starts shortly after he’s returned to Earth, physically and psychologically shattered, with some horrible rumours about him circulating. Immediately, there are questions. Why and how did the rest of the crew die? What went wrong? How is it that he survived? The unwrapping of said mystery is careful and unrushed, with two parallel timelines – one in the present, following his slow recovery, the other following the mission to the planet of Rakhat from the beginning to its disastrous end.

“No questions? No argument? No comfort for the afflicted?” he asked with acrid gaiety. “I warned you. I told you that you didn’t want to know. Now it’s in your minds. Now you have to live with knowing. But it was my body. It was my blood,” he said, choking with fury. “And it was my love.”

And I do mean unrushed. It’s not until about halfway in that they even make it to the planet – most of it is dedicated simply to developing the characters of the crew. I didn’t mind; I love character-focused, mundane stories. They’re essentially good people who make some terrible choices and suffer for it. I found them all immensely likable. Charismatic (later prickly and closed off) Emilio, the utterly adorable old couple Anne and George, Sofia with her hidden past…they certainly aren’t perfect, there are two or three that could have been fleshed out more, but their relationships and interactions with each other, their inner struggles are the most of what made the story so compelling to me. The tone is a weird mix of tragic and painful yet casual and oddly hopeful, with quite a bit of humour and heartwarming interactions. (Or perhaps I read so much grimdark in my teens that my standards for hopeful are seriously off.)

Since the story starts at the end, then slowly works towards the middle, there are never any illusions about what happens, no manipulative twists. The fact that it’s a tragedy is perfectly clear right from the start and it’s up to the reader to decide whether they want to go through the wringer, take the risk of getting attached to the characters only to watch them die. Me? I thought, bring it on. Do your worst. And yet, I was still not prepared for the last couple chapters. The ending could have stood an additional chapter since most deaths were somewhat glossed over, but the final reveal was an unflinchingly brutal punch in the gut. I was not prepared. It makes sense within the story, it does not come out of nowhere, it’s not mishandled. Regardless, no amount of warning helps.

Since many of the characters are Jesuit priests (others are from various religious backgrounds), religion and God are a major focus and a driving force for the plot. I should probably mention I was raised non-religious and remain so to this day – faith is nearly a foreign concept for me. And it didn’t bother me at all. It isn’t too pushy, the priests are just as human and flawed as everyone else, and seeing things from the viewpoint of a character with a completely different perspective is fascinating – but I can see how it would be too much for someone else. So if that’s a major pet peeve, stay away.

Worldbuilding-wise, I have seen a few people mention that the science is questionable at points, which I can’t comment on, and that the selection of the crew was unrealistic. I’m no scientist, nor much for hard sci-fi (which this definitely isn’t) and there isn’t much that breaks my suspension of disbelief. Some of the background details about “future” Earth do strike me as somewhat unrealistic – somehow, in about 20 years (the book was published in 1996 and the “past” parts take place around 2018), the balance of power transformed completely, wars broke out in some parts of the world, everything went to shit. On the positive side, the alien cultures of the Runa and Jana’ata, the two sentient species of Rakhat, are fascinating, though I can’t say more without spoilers. That, along with the other aspects, like the characters and plot structure, was enough to make me overlook any holes.

Another issue that isn’t really relevant to the book but I feel like I have to comment on regardless because it bothered me is the afterword.

The idea came to me in the summer of 1992 as we were celebrating the 500th anniversary of Columbus’s arrival in the New World. There was a great deal of historical revisionism going on as we examined the mistakes made by Europeans when they first encountered foreign cultures in the Americas and elsewhere. It seemed unfair to me for people living at the end of the twentieth century to hold those explorers and missionaries to standards of sophistication and tolerance that we hardly manage even today. I wanted to show how very difficult first contact would be, even with the benefit of hindsight.

The idea that even the best of intentions can result in a disaster through lack of foresight, poor choices, and not fully considering the implications – that first contact is complicated and difficult and messy with too many ways things can go wrong – that’s all well and good. Fortunately, the story itself is far from Columbus apologia, but he is still a terrible example to choose. Subjugation of the native people, participation in slave trade…well-intentioned is, well, a stretch to say the least.

Recommended to: fans of character-focused stories, emotional masochists, fans of soft sci-fi, anyone intrigued by the concept or structure
Not recommended to: pedants, anyone bothered by rape, those who don’t like religion in their stories, those who hate it when characters make irrational choices, fans of fast-paced stories, content warnings: extremely graphic rape and discussion of suicide