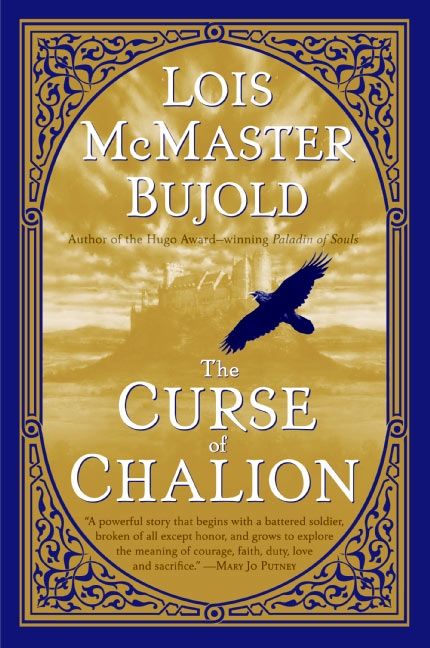 This is not the first time I have read this book. Not even the second. My best estimate would be about fourth or fifth – it’s simply one of those comfort reads I keep returning to again and again when I need a pick-me-up. The familiarity, the characters…it’s one of those books that never grow old and I feel I owe it at least a short review.

Any man can be kind when he is comfortable. I’d always thought kindness a trivial virtue, therefore. But when we were hungry, thirsty, sick, frightened, with our deaths shouting at us, in the heart of horror, you were still as unfailingly courteous as a gentleman at ease before his own hearth.

After years of war followed by months spent as a galley slave, Cazaril returns to Valenda, where he served as a page when he was a boy, now a broken man. Looking for a lowly position, he is instead appointed as a secretary to the young princess (or royesse) Iselle. Though the story slowly grows more epic in scope, concerning not just Cazaril’s past, but curses, gods, and the fate of the whole kingdom, it remains personal and character-focused throughout. The pacing is rather slow and languid, but I found that it fit the story rather well.

And Cazaril is one of the most likable characters I encountered in fantasy. He’s loyal, kind, level-headed, experienced, and no matter what life throws at him, he stays true to himself and never gives up. He’s also no longer young and struggles with various aches and pains regularly, which is somewhat unusual for a fantasy protagonist, but a welcome change. I admit I have a weakness for stories of characters who are recovering from some horrible ordeal (The Sparrow’s present day storyline hit much similar notes), but even so, I found him impossible not to like and cheer for.

The setting is faintly Spanish-inspired, which is reflected in the titles and the names. There’s no real magic per se, but there are very real gods, including curses, blessings, and miracles related to them. And with gods and religion being one of the major themes, there’s a lot of deus ex machina and convenient coincidences. It didn’t bother me because it fit the concept well and didn’t seem out of place, but if you look for a potential deal-breakers, there you go.

Recommended to: fans of character-focused fantasy, those looking for uplifting books, books that are relatively low magic, standalone epic fantasy books, and/or older protagonists
Not recommended to: fans of fast-paced stories, those who hate deus ex machina, content warning: discussion of rape (nothing on-screen)

11 thoughts on “Reread: The Curse of Chalion by Lois McMaster Bujold (World of the Five Gods #1)”