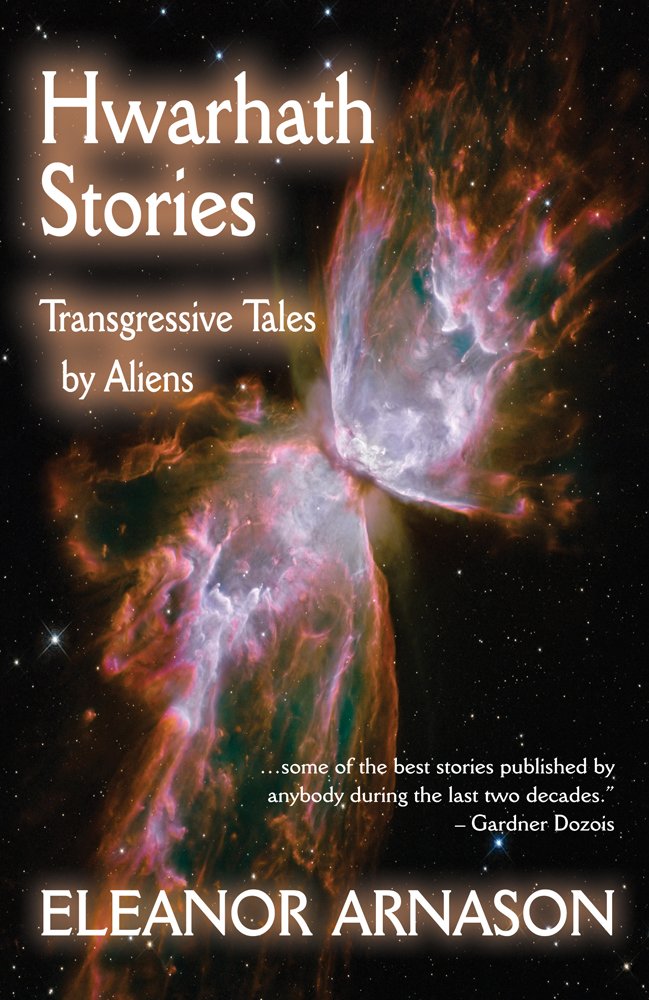 I’m a huge fan of Arnason’s hwarhath-related work. The Lovers, one of the stories in this book, is one of the first short stories I ever read and still my favourite, and when I could finally get a hold of Ring of Swords, the only full-length novel set in this world, it did not disappoint either. However, I don’t really read anthologies, so it took some…rather aggressive persuasion from a friend (you know who you are 😉) before I picked this collection up. And it’s straight-up, one of the best, most creative, in-depth, and well thought out pieces of socio-cultural worldbuilding I’ve ever read.

Since most of the short stories take place far, far before Ring of Swords and there is only one small cameo, the novel and the anthology can be read in any order. If you want a sample, The Lovers, The Woman Who Fooled Death Five Times and Holmes Sherlock are available to read online for free.

Knowledge of humanity has led some writers to question other aspects of traditional society. Is it right to condemn heterosexuality so absolutely? Is it a good idea to place society and the family “in front” of individuals, as the hwarhath have usually done, or should individuals have some freedom? At what point does individuality become chaos? How important is love? Or loyalty? How dangerous is conservatism, a strong trait among the hwarhath, to the future of the species? Conversely, are the new ideas that come from humanity likely to destroy hwarhath culture?

The story is framed as a collection translated from the hwarhath language and intended for reading by humans to learn more about their society. There are interludes explaining more about the hwarhath customs, and the types of stories they have, as well as “translator’s notes” and footnotes. Some of them are also interconnected, with characters from one appearing or being mentioned in another (The Actors/Dapple/The Potter of Bones being pretty much a trilogy).

The stories are stories of forbidden love, of people who go against the norms of the society in some way – a society very different from ours. The main concept being explored is what if homosexuality was considered moral and heterosexuality immoral? Why would that be? How would such a society work? How would it impact other aspects of their culture? Gender norms? Religion? How would they see humans? What prejudices would they have? The examination of that through those stories is incredibly intricate and (at least in my opinion) completely believable. Not to mention interesting. The hwarhath are nowhere near perfect and it makes for a fun thought experiment.

If there is a flaw, it’s that after you read a few in a row, they start to feel a bit samey. I took a big break after about 30% and even so I should have spaced out the middle few a bit more. But it’s a minor quibble, and overall, I highly recommend it.

Recommended to: fans of Ursula LeGuin and sci-fi that focuses on culture more than science
Not recommended to: uh…those who really don’t like short stories?