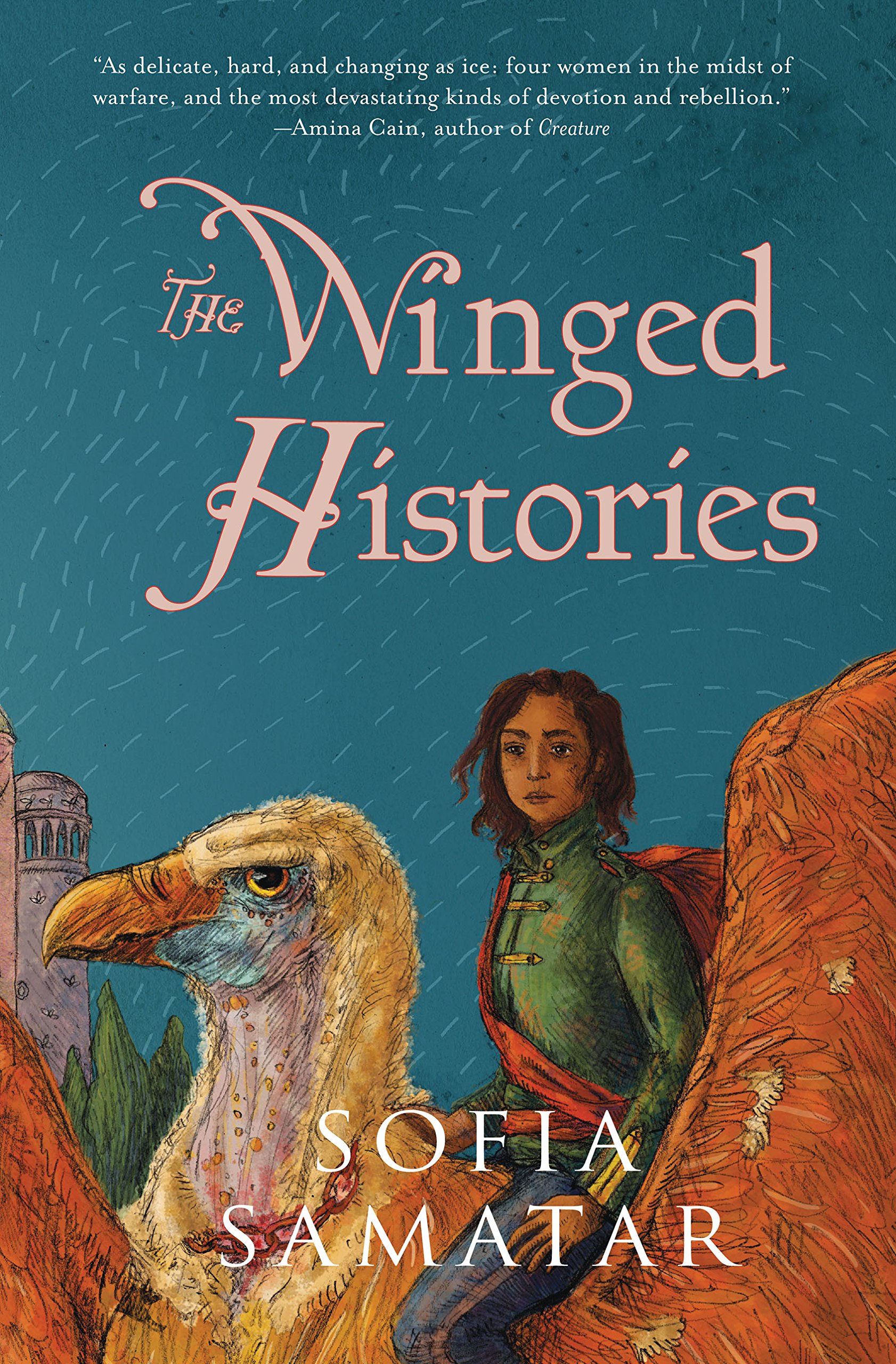 Note: I have not read A Stranger in Olondria before The Winged Histories. It works perfectly fine as a standalone.

This is one of my favourite novels of all time along with The Gray House and more recently The Ten Thousand Doors of January. I first read it in the summer of 2017 and have been thinking it was a shame I never wrote up anything on it ever since. A book that means so much to me – that deserves words. Praise. Anything. So allow me to write something a little…extra ✨

I have breathed on shadows, as one breathes into a soap bubble, to give it breadth and life. I did it because I had to, because human beings cannot live without history, and I have no history or tradition that is not located in a pale, aggressive body lying in the dirt, or hanging from a tree. […] What is the difference between a genius and a monster?

It’s so hard to set expectations correctly. Anything, anything you knew about fantasy and the paths stories take, their structure – it goes right out the window. Forget it. As much of literary fantasy, it avoids the beaten path.

The simplest way to begin would be to say it is the stories of four women tangled up in a civil war:

I could attempt to write a plot summary as I do for any other story. I could tell about the civil war. Religious conflict. A desire for independence. Whispers of monsters. Except…except that’s not what the book is about at all, not directly. It would miss the point by a mile.

From my notes from the first time read, I initially thought the pacing was odd, but I was still expecting it to go the way most books go. A woman runs away from home to join the army and proves her worth to her male colleagues, the most familiar of stories. And again the except. Except the training is glossed over, except the war is pointless, except she is forced to return home with a broken leg. And her PoV section is only the first of the four. The rebellion and events leading to the civil war are, again, mentioned only in passing. In interludes. Scattered across all four sections. I thought I would not like each part of the book being from the PoV of a different character, it’s a structure that usually bothers me, but I ended up liking them all.

That mark on your face. Not a physical scar but a shade of expression, a cast. The look that said: I have killed and will kill again.

A fierce look, I thought then. Now I think: broken. I think: lost.

I already mentioned Tavis, the soldier, the one who got to make history, but her story is only the start. Next is Tialon whose history is so tied up in that of her famous father that there is barely anything of herself in it (“But we are not concerned with the child’s memories. We are concerned with him, with his genius.”). She tells of the other side of history, the great men who are cruel in private and what happens to those who end up on the “losing” side. Religious disputes. Her own loneliness and isolation.

Seren’s chapter is my favourite. It’s the shortest and the least linear of the four, without any chapter breaks. The closest to poetry. And I get so lost in the writing I have a hard time describing what is it about. Stories, I suppose. Love and loss and the importance of songs.

Siski I can’t say much about (spoilers!), except that she’s remembering the past and hiding a terrible secret.

The word that comes to mind when I try to descibe the narrative style is impressionistic. Fragmentary. Because that’s what the book is: sequences of impressions of these four women. Each narrator changes the style and the structure slightly, but there’s nothing linear about it. Suddenly she will start telling about her past, then switch back to present. The various threads interweave, transitions are blurred, blink and you’ll lose track and get confused. It loops back on itself, almost stream of consciousness.

Really, the plot, the civil war, what would usually be in front, is the least of it. Obscured under so many layers that it becomes nearly invisible, told largely between the lines and in brief interludes between the four sections. It’s a reverse story, a book turned inside-out. History told through feelings and memories of women* instead of achievments of great men.

It was there in the desert that my blood returned, there that Seren taught me to seize black ants and snap them between my teeth, there that my heart came open in two halves and words poured out of it: my heart had not been empty after all. I talked night after night until I was hoarse. There was a curl of whiteness in the dark sky, what the feredhai call the track of the goddess Roun, the wake of her boat in the sea of the heavens and this is what was coming out of my heart, memories pouring out in waves.

The prose is gorgeous and somehow close to my heart, quite possibly the best I’ve ever read. It’s pure stained glass. It feels indulgent. I want to read it out loud. It gets stuck in my thoughts and I can’t help channeling it a little even now. What I like the best is that it achieves the effect it does without ever being archaic or abusing the thesaurus. It’s all rhetorical figure magic and it’s near impossible to pick out quotes that’d do it justice, because half the beauty of it is in how a certain turn of phrase may be twisted and re-used a few pages later. I said the narrative is often all tangled up – it’s the same with the prose. It reminds me of music.

They murmur. They stroke her hands. They say: “I know.”

As the title says, it’s a book about history, who tells it, who makes it, who is remembered, the biases, the bystanders, the ones caught in its flow, legends of monsters that may or may not be true. Most of all, Samatar reminds us that history is not only a chronological list of dates and achievements of great men – that it’s far more than what it’s usually reduced to. I love it for that, too.

Of course, The Winged Histories would never be for everyone. I think it’s even less accessible than The Gray House. The distance from plot alone is something many people will find grating, no matter how intentional. But if you love everything non-linear and poetic and experimental as much as I do, please give it a try. You will not regret it.

* If you want a beautifully written nonfiction version of history told through personal stories of women, check out The Unwomanly Face of War. Warning: no book ever made me cry as much.

3 thoughts on “Reread: The Winged Histories by Sofia Samatar (Olondria #2)”