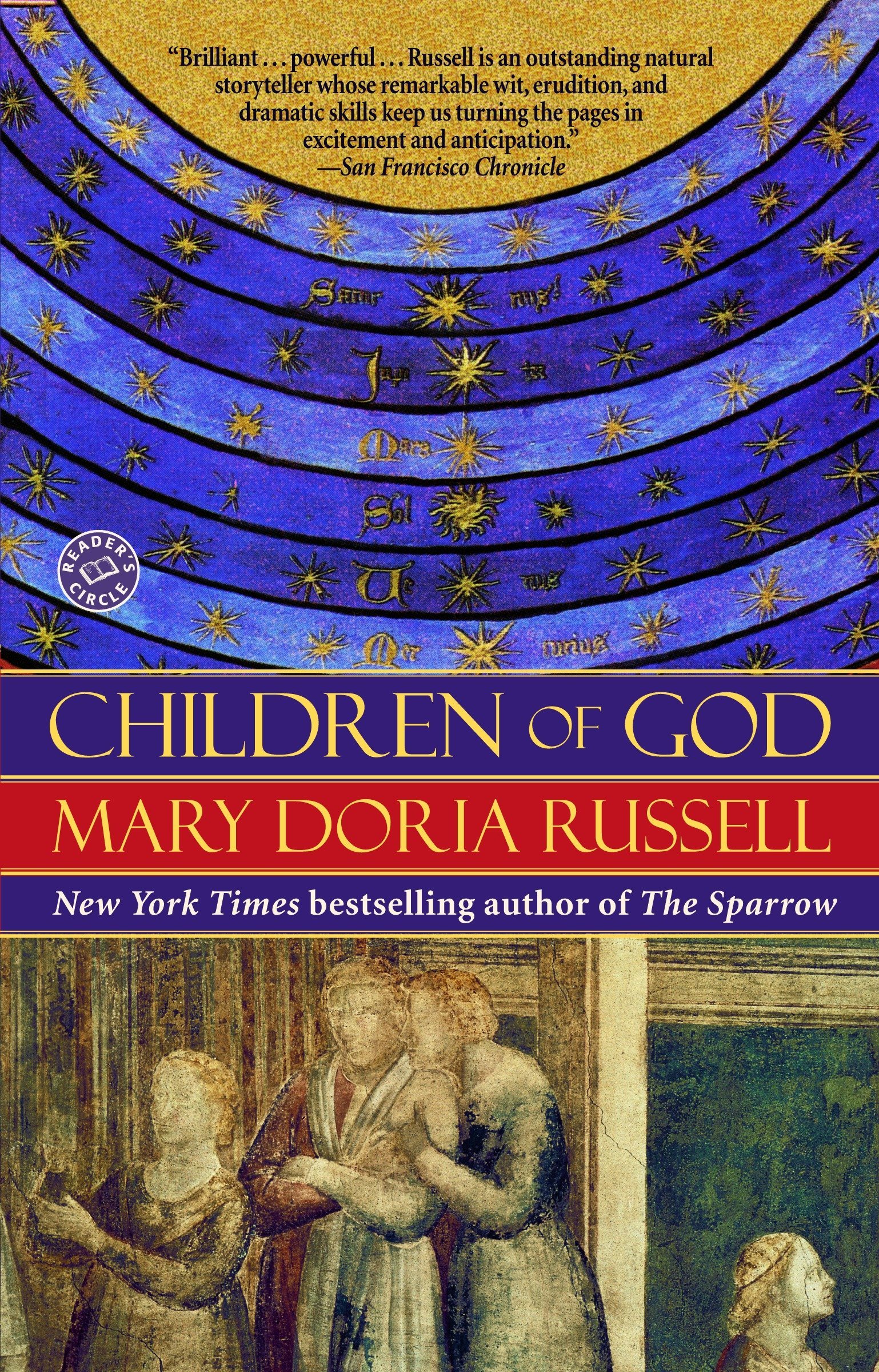 I was initially unsure whether I should read this book. I enjoyed The Sparrow very much (despite its flaws), but there were some…mixed opinions on the sequel and whether it completes the story or ruins it. Unfortunately, I think I have to side with the latter – perhaps not ruins, precisely, but doesn’t add much and is inferior in more or less every way. And the ending actively made me angry. Read the first book and stop there, it stands alone just fine.

We meant well, she thought, looking up at a sky piled with cumulus clouds turning amethyst and indigo above the clearing. No one was deliberately evil. We all did the best we could. Even so, what a mess we made of everything…

The Sparrow was not perfect, but it was whole. I can’t say as much for Children of God. This is, as you can probably tell, going to be a bit of a rant.

Children of God continues exactly where The Sparrow left off. Emilio is recovering from his ordeal as well as anyone could have hoped for. He’s getting stronger and he slowly gets to the point where he’s as healthy and happy as someone who went through as much trauma as he did can be. Of course, his superiors have other plans for him, regardless of what he thinks ot them. And so things get worse for him again. Much worse. At the same time, Rakhat isn’t exactly calm either…

While the first book was among the most interesting I’ve read when it comes to strucure, a reverse mystery where the outcome is known at the start with alternating past and present chapters, Children of God is just a mess. Chapters set on Earth, chapters set on Rakhat, with odd “when character A was talking to character B many years later, character B said…” interludes in between that just felt like infodump…yes, the author tried to do a similar thing with two timelines here, but it came off as clunky and awkward and at points forced. As did many of the plot points.

In fact, “clunky and awkward and at points forced” describes most of the book.

Where The Sparrow was tight and focused, Children of God was all over the damn place. I don’t have an answer why I didn’t like the plot or the ending other than “it just didn’t feel right” but I guess that’s as far as I can go without spoilers anyway. So there. At least the old humour was still present in places.

For a hushed instant, [character] stared in blank astonishment and then blurted, “Jesus!” To which the Bishop of Rome replied, with unexpected humor, “No, only the Pope.”

The worldbuilding – something I had mild complaints with even before – was equally shoddy. I was never quite sure at what technological level Runa and Jana’ata were – most of the story mentions relatively little technology aside from the occasional mention of radio. At one point you get a feel that they still fight hand to hand, then suddenly out of nowhere artillery is mentioned when nothing gave that impression before. It seems very much of a “whatever is convenient for the plot” method.

I wasn’t too fond of how religion was handled either. In the previous book, yes, it was thematically important – a lot of characters are priests – but it was not pushy and I found it interesting to see things from a different perspective. Here it was much preachier and there was just…too much of it for my profoundly non-religious self. I have never appreciated philosophical diatribes (some day I do need to write a rant on Malazan…) – and if nothing else, it bored me. I skimmed a lot. And that’s not even considering the other things it has to say. It paradoxically feels both heavy-handed and yet I couldn’t find what, exactly, was the point it tried to get across (though that may be just me?), if that makes sense. Then I read the appendix interview and got pissed all over again:

Here, I had in mind the invasion of North America by European settlers. That was unquestionably a catastrophe for the native peoples of this continent, but at the same time, it was the best damned thing that ever happened to an awful lot of immigrants from around the world.

Again: what the fuck?

[character] didn’t understand heartache. Or regret or longing or divided loyalties. Or anger or shattered trust or betrayal. Such things had no clarity. They involved expectations of another’s behavior, and [character] had no such expectations.

In fact, this book has precisely one redeeming quality that saved my kindle from having a most unfortunate collision with a wall, and his name is Emilio Sandoz. He remains one of my favourite characters and his POV was what got me through. I just plain like the guy – his resilience, his prickliness, his refusal to take any shit, his history – he has depth and three-dimensionality. For most of the book, I was conflicted – I hate the philosophical crap, I hate the structure, oh look Emilio chapter, yay, I hate philosophical crap, I hate the structure, etc. And I can’t help but feel the clunkiness of the plot did him a disservice.

Enjoyment: I think this pic describes it pretty well

Recommended to: those looking for books with heavy amounts of religion (more precisely Catholicism), those who thought Emilio hasn’t suffered enough
Not recommended to: non-religious folks, those who want good autism representation, content warnings: rape, discussions of suicide

3 thoughts on “Review: Children of God by Mary Doria Russell (The Sparrow #2)”