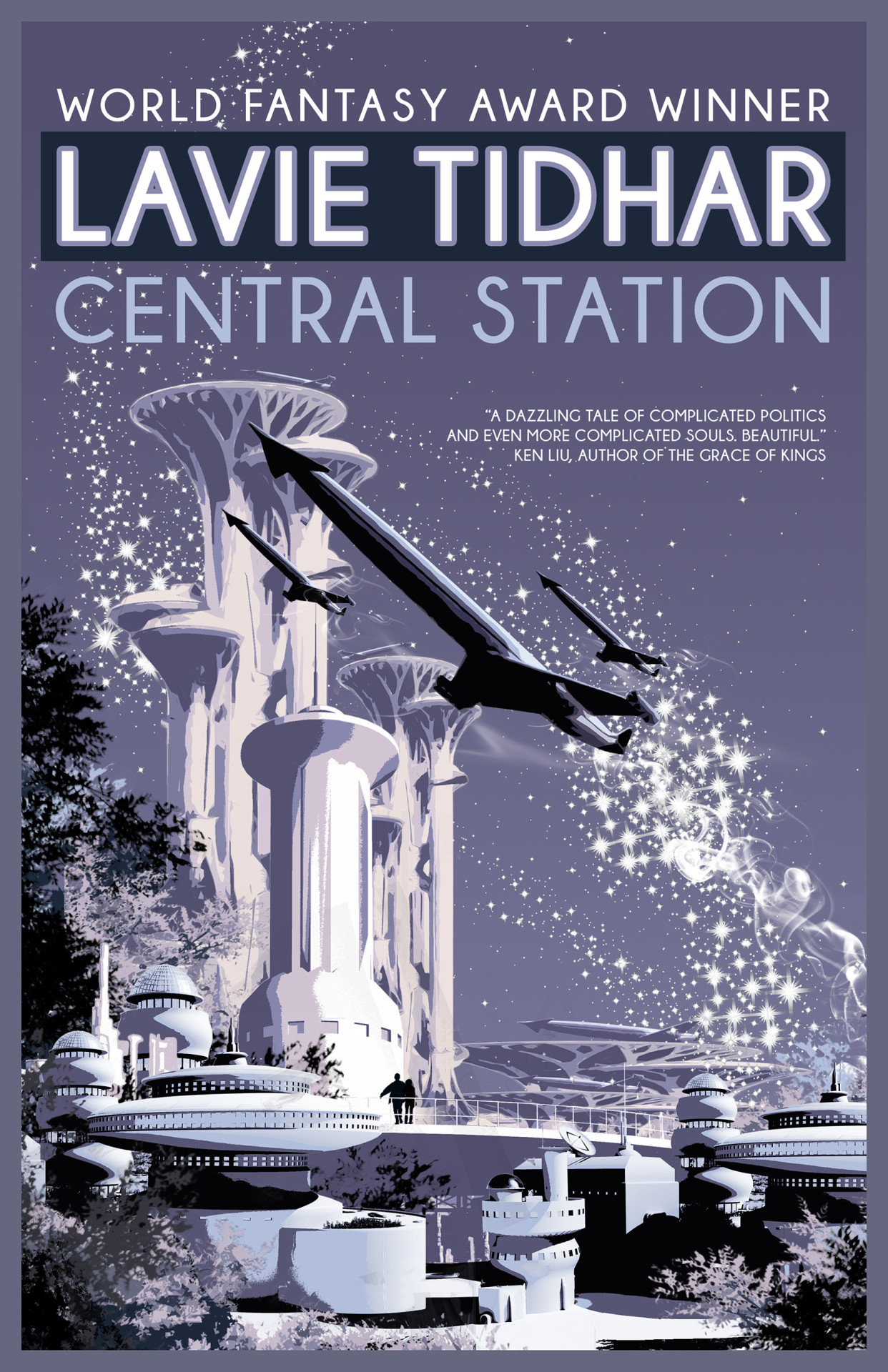 I probably never would have read Central Station at all if not for the fact that this year’s r/Fantasy Bingo had a cyberpunk square. I hate the very thought of cyberpunk. Oppressive high tech societies? No thanks. So in the oldest tradition of Bingo, I went out in search of edge cases. Oddities. This was one of the candidates I couldn’t quite choose between – then I saw it in a bookstore and it was decided. And I couldn’t be more glad I did.

A group of disgruntled house appliances watched the sermon in the virtuality – coffee makers, cooling units, a couple of toilets – appliances, more than anyone else, needed the robots’ guidance, yet they were often wilful, bitter, prone to petty arguments, both with their owners and themselves.

The easiest way to describe it would be “gorgeous sci-fi fever dream.” I have a long-standing love for weird, trippy books and for slice of life, so I could hardly have stumbled upon a more perfect match for my tastes. And before I scare anyone off: it’s strange, yes, but never confusing.

I usually try to do a quick summary of the plot and what the book is about, but this is true slice of life in that there’s no real plot, no real stakes. Each chapter follows another character as they go about their day. Structurally, it’s much like a mosaic, or a tapestry – while everything is very interconnected, there’s a lot of fragments and no arc the story would work towards. It just gently meanders along. I found it extremely relaxing to read. The general tone is calm and optimistic, and I liked pretty much all of the characters.

The real star of the book, however, is the worldbuilding. Even though it takes place in Tel Aviv, it’s an obviously far-future world, very different from ours.

The general approach is of the surrealist, kitchen sink, throw-it-in kind with everything from robo-priests, vampires that feed on data, children with strange powers, oracles, drugs that induce a religious experience, completely mundane booksellers, artists that create gods, talking elevators…so many strange concepts that you think there’s no way this could work. No way it wouldn’t feel gimmicky. And yet it does work – wonderfully. It probably helps how integrated and interwoven every single aspect is – nothing appears in just one chapter, but is perhaps mentioned in the first, and then mentioned again in the second, and finally explored more in-depth in the third. There’s a lot of references to religion (especially Judaism) and mythology, a lot of which I probably missed, but for someone with more knowledge in those areas it could be a real treat.

Another aspect I want to highlight is the diversity. Central Station is a true melting pot. Out of all the human characters, I don’t think a single one was white, or from the exact same cultural background as another (except if from the same family). There are also no references to America, or Europe at all, and England is referred to only as (paraphrased) “those barbarians who drink tea wrong,” which gave me a good chuckle. And among the mass of SFF books written from an obviously Anglo cultural viewpoint, it’s neat to read one that isn’t.

But most of all, Central Station is a book that has to be read to be believed. I’m not sure any words can do it justice. It’s strange, it’s beautiful, it’s different, and I’d most highly recommend it.

Recommended to: slice of life fans, anyone who liked City of Saints and Madmen but wants something simpler, fans of weird literary SFF, anyone looking for a very chill book, those who want diverse settings
Not recommended to: those who require a plot