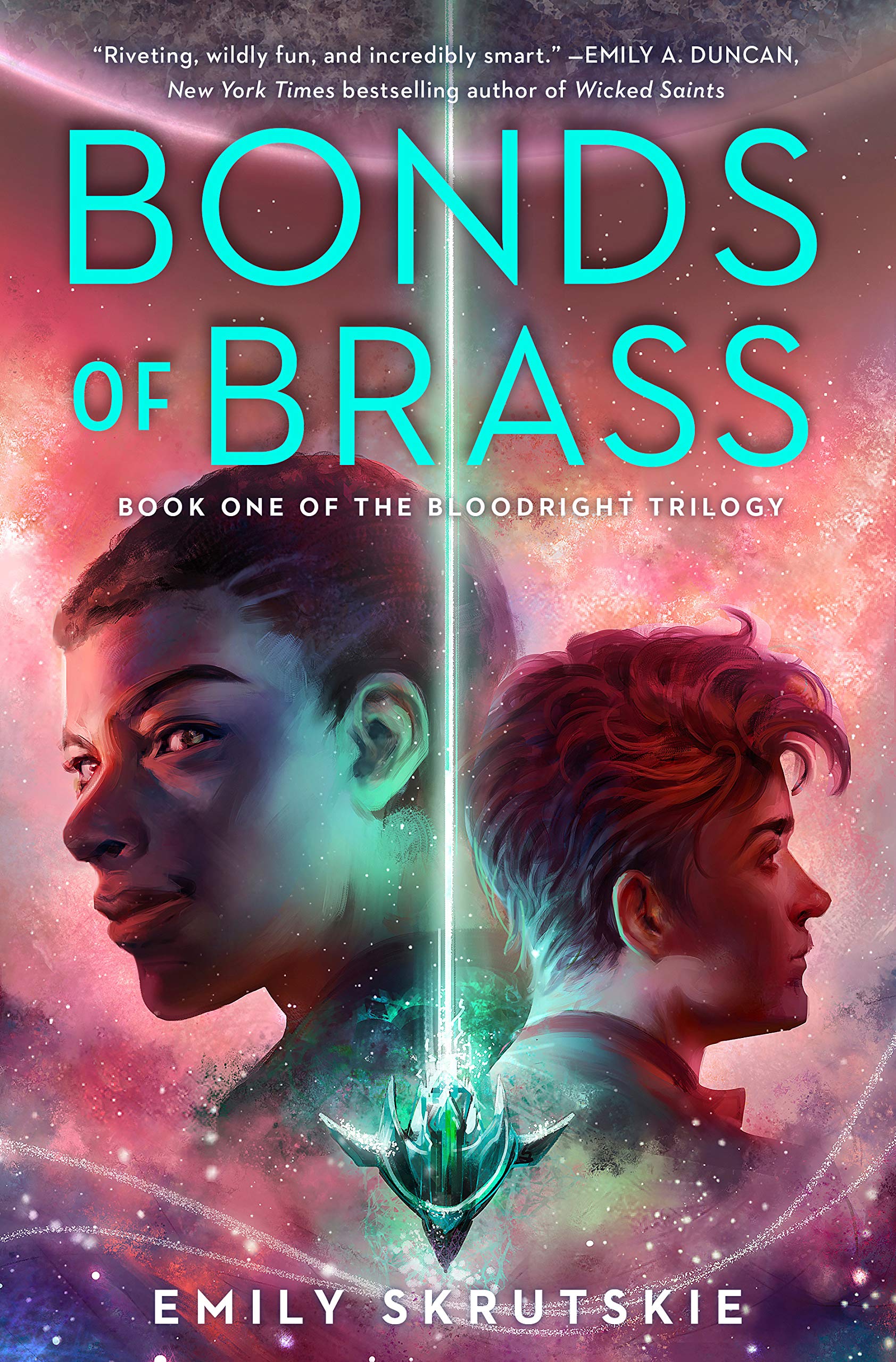 ARC received from the publisher (Del Rey) in exchange for an honest review.

Sometimes, you just have a powerful feeling that you’re going to love a book and in my experience, that instinct is never to be ignored. Bonds of Brass first came to my attention randomly, on twitter. Still in the depths of my Star Wars obsession and salty over Rise of Skywalker (oh so salty), I had to request it. It seemed tailor-made for what I wanted and needed.

And it was fantastic. What it promised, it delivered in spades. Fast-paced, yup. Heavily Star Wars inspired, yup. Fun, fanfic-style romantic tropes, yup. More twists than a ship executing a complex maneuver, yup. And that ending. Holy fuck. It’s the kind of book you read popcorn in hand, and then recommend to friends to watch their reactions popcorn in hand too. I’d say it even overdelivered – in places, I could barely manage a few pages at a time because the tension was too high and I was too afraid for the characters.

If a highly entertaining but not necessarily relaxing story is what you’re looking for, this is the perfect book for you.

Ettian is the best pilot in the Umber Empire’s military academy. Orphaned and left to fend for himself in the streets after the Umber Empire conquered his home, he has spent the last few years trying to put his life back together, forget his past, and abandon any hope that the Archon Empire might be restored. When his best friend (and let’s face it, crush) Gal is revealed as the Umber heir and attacked from multiple sides, he is torn – should he help the person he loves the most or join the rebellion in hope that the Archon Empire might be restored?

First of all, the pacing is absolutely breakneck. It doesn’t let go for even a page. Just when you think poor Ettian couldn’t get himself more tangled up in the whole mess, there comes another twist of the knife. The plot is designed for maximum internal conflict – in a way that felt natural to me – and while that’s precisely what makes it so intense and compelling, it was, at points, too much for me. Too good, perhaps. I was often too afraid for the characters to read on and could only handle reading it in short bursts. But that’s 100% a me thing. AND THAT ENDING. Wow.

The reason why it works so well are the characters. It’s written from Ettian’s perspective, in first person, so we really get to see inside his head. It’s very well done. I felt for him – his fears, his insecurities, indecision, split loyalties, trauma. He’s not perfect by any means and it bites him in the ass literally all the time, but he’s complex and utterly compelling. I also liked Wen, a friend they make along the way…but I did have a slight issue with Gal. We don’t really get to see the side that made Ettian fall in love with him, and his compassion remains mostly an informed attribute – from his behaviour on page, he doesn’t really deserve the level of adoration (and he’s shitty to Wen…!). Might also be due to the limitations of intensely first-person single-POV narrative style, but the fact remains: I rooted for Ettian to join the rebellion more than for him to remain with Gal.

The world felt heavily inspired by Star Wars (a huge plus for me!) – spaceship stunts, hotshot pilots, empires, the way travel works, vibroweapons, rebellion, a group of warriors that was wiped off by the empire (OR WERE THEY) – but with enough original touches that it was more than just Star Wars with serial numbers filed off. I look forward to seeing more of it in the next book.

In short, it’s fun, it’s angsty, it’s one hell of a ride, and I’d absolutely recommend it. And most importantly: when do we get the sequel?

4 thoughts on “Review: Bonds of Brass by Emily Skrutskie (The Bloodright Trilogy #1)”