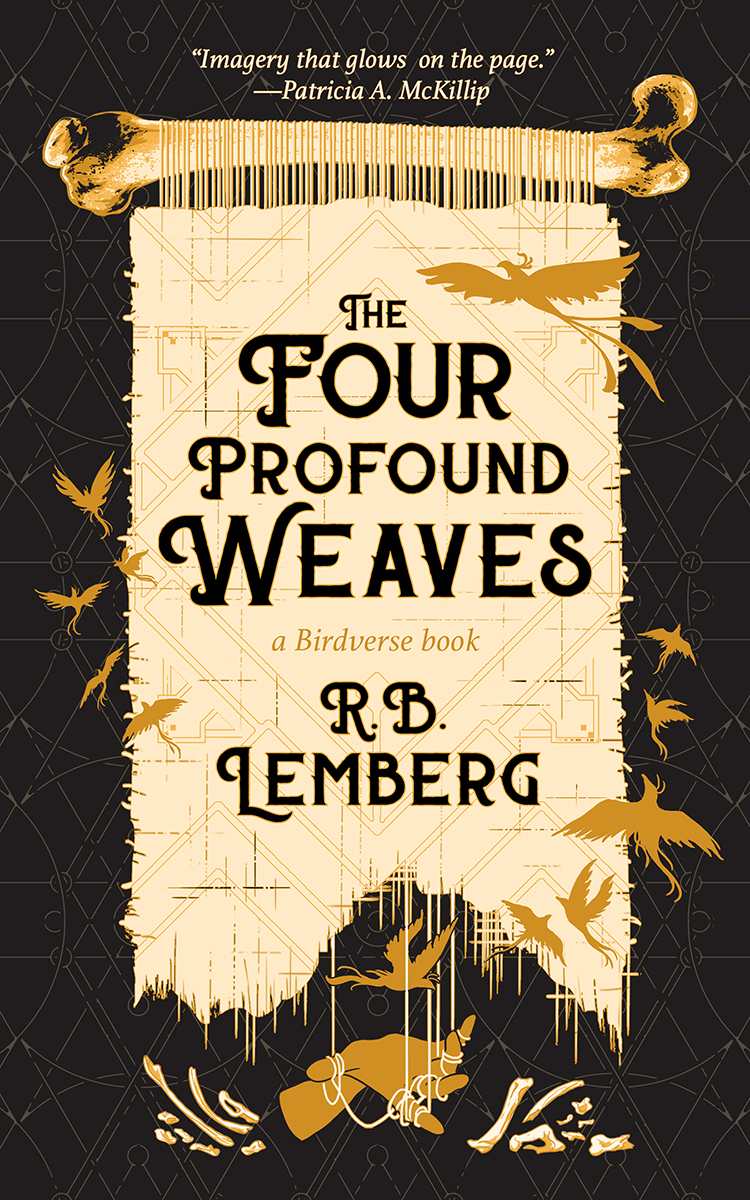 ARC received from the published (Tachyon) in exchange for an honest review.

They were birds of bright fire that fell from the sky and cocooned me, until I could see and hear nothing except the warmth and the feathers enveloping me and the threads of the wind singing each to each until my whole skin was ignited by the sun, my body changing and changed by the malleable flame.

I have been familiar with R.B. Lemberg’s works for a while – Geometries of Belonging and Grandmother-nai-Leylit’s Cloth of Winds (which should preferably be read before reading this book) are two of those short stories that stuck with me long after I read them. So when Erio brought The Four Profound Weaves to my attention, highly recommending it, I knew that sooner or later, I will end up reading it. Queer books with lovely prose are precisely my kind of thing.

As suspected, I adored it.

The story stars two elderly trans protagonists. Uiziya is a Surun’ weaver whose greatest wish at the beginning is to learn the last of the Four Profound Weaves from her exiled aunt and weave a carpet of death. She transformed very young and has always been accepted. The nameless man, nen-sasaïr, has been living with the Surun’ for three months, ever since his transformation, because his culture isn’t tolerant of changers. After a life of denial, he feels unmoored, frustrated, unsure of where he belongs. Together, they go on a quest.

But that’s only a part of it. Even though it’s a novella, The Four Profound Weaves has so much going on that I don’t know where to start. I don’t think I can do it justice.

First, the prose is absolutely exquisite. And the story is exactly the sort of fairytale-esque that I’m an absolute sucker for. A quest for the carpets, magical objects, the whole deal. At the same time, the worldbuilding is entirely original and well thought out. Seeing as the author also wrote several short stories set in the same world, this shouldn’t come as a surprise.

“You see other lives as easy because you don’t see them. You see your story as complex and hard because you know it best.”

And then the themes. Someone better at literary analysis could probably write an essay on it. It contains so much. I could say it’s about identity and belonging, but that doesn’t quite cut it. Or about two trans people with two very different experiences, acceptance, loved ones that smother you, culture clash, of how hard and messy change can be, and how you’re never too old to turn your life around…so many things. It’s like a tapestry itself, multiple interwoven themes and threads coming together into a beautiful whole.

But to me, by far the biggest surprise was that the length felt exactly right. I found I don’t like novellas very much – they often feel as if they’re missing something, as if either there’s too many ideas or plot crammed into too small of a space or as if there’s not enough. Not so here; Lemberg hit the precarious balance perfectly. The Four Profound Weaves feels complete. It needs nothing more and nothing less than what is already there. It’s probably safe to say this will be one of the highlights of 2020 for me and I most highly recommend it.