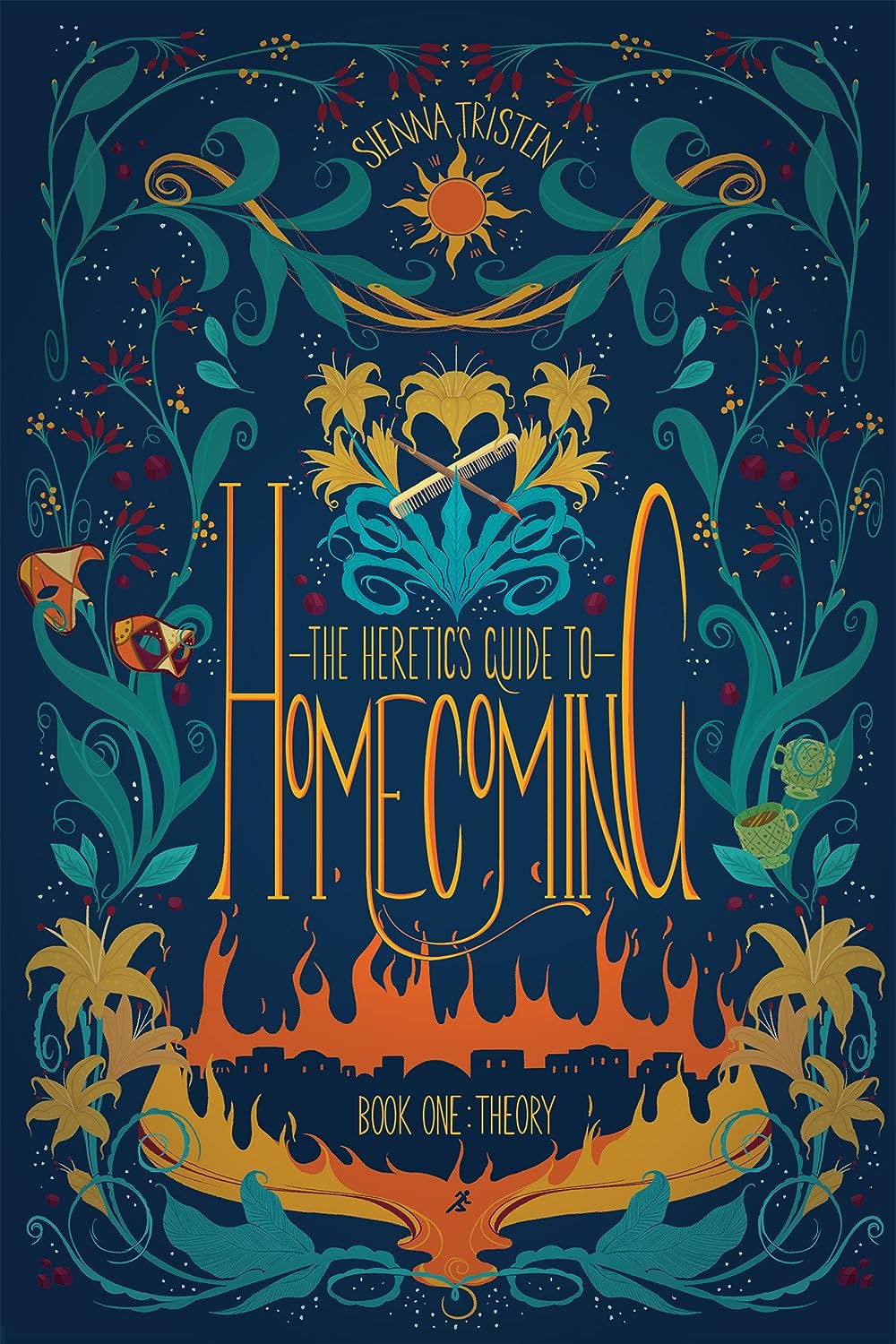 “You think I’m going to tell you now when we’re this close? Half the appeal of having you tag along is the fact that you dissolve into a puddle of unintelligible enthusiasm every time we come across something remotely interesting. […] It’s a real treat, watching you fall in love with the things I love.”

Heretic’s Guide is a paradox. I want to shout its praises from the rooftops because how come that I’ve never heard of it before Lynn recommended it to me when it’s so good and so relatable? (Not to mention the gorgeous cover. I had to go for the paperback.) But on the other hand, I almost want to keep it secret and not tell anyone it exists, because I couldn’t stand someone disliking it and being harsh about it. This is, quite possibly, one of the hardest and yet most necessary reviews I ever wrote.

Because I’ve never been this personally attached to a book before. Sure, there’s been my eternal favourite, The Gray House, which has a lot of themes that resonate with me, or The Curse of Chalion, my forever comfort read. But neither of them felt this intimate and I can easily shrug off the thought of someone hating them.

Ronoah suffers from severe anxiety and never stays in one place long before he feels like he fucked up and has to run. He knows he’s screwing himself over again and again, yet feels powerless to break the circle and beats himself up over it constantly. He’s also a complete cinnamon roll. Then he meets Reilin – a mysterious trickster sort of character, you probably know the type – who drags him along on a pilgrimage under several conditions…and that’s really all there is to it. There is no violence, or romance, or anything much. It’s split into three parts – the first, where Ronoah and Reilin meet; the second, where they travel with a troupe of travelling performers; and the third, set in the caves. In a way, it’s a little similar to Tess of the Road, one of my favourite books – the main character goes on a journey, which is really more of a vehicle for character development and overcoming trauma.

This may suit you, or it may not. But the reason why I adore this book so much, the reason why is closer to my heart than any other, is that it portrays the ugly, messy, destructive side of anxiety better than anything I’ve ever read. It’s not pretty. It’s not a cute quirk. And it’s certainly not fucking logical. Seeing it all laid out plainly like that was so relatable it was embarrassing. Not all, but too much of it. Painful and yet also oddly comforting. It’s so strange to feel seen, not something I’m used to.

And recommending it while calling it relatable feels like showing strangers pics of your room at its absolute messiest stage. Not something you’d want people to see with your name attached to it. I wouldn’t be writing this review at all if I didn’t think it’d be important – if I didn’t hope someone else might also find solace in it.

The hard truth was, it wasn’t enough to do one courageous thing and call it a day. One challenge accepted did not make challenge suddenly easy to accept; one act of bravery did not mean he was suddenly bold, or confident, or eager to take risks. He wanted to, gods how he made himself sick with the wanting, but that wasn’t how it worked. You don’t change overnight, said a voice in his head, not for things like this. This is how you form habits, how you shape personality: one excruciating step at a time. Congratulations, you’ve done it once. Now do it again. And again. And a hundred more times. And then it will begin to feel easy.

I almost, unwisely, hoped for answers. But there are none, really, except that change is hard, painful work. There’s no magic cure for Ronoah, and I liked that.

All that said, it did take me a while to get into it. Part of it is the style, how it’s almost told backwards and very much not how stories are “supposed” to be told (and aren’t rules there to be shamelessly, courageously broken?)  – there is a journey in the present, but it’s really more of a story of Ronoah’s past told through the present with all the digressions and little side stories and lots of telling instead of showing. I’d usually complain about that (ahem), but here it made a lot of thematic sense and the prose is lovely. Additionally, for a long while, it seemed like Reilin’s behaviour was heading in the direction of “I’m an asshole but it’s for your own good,” a trope I despise. But at the end, it was all good. I liked how much compassion most of characters showed for Ronoah and his struggles as well.

(One more similarity with Tess of the Road: both books actually get that there are different languages in the world and how it feels to be partially fluent. Which, as someone who speaks two and a half languages, is always awesome to see.)

Another thing I found fascinating is that this book is part of a collaborative worldbuilding project called Shale. It’s not something I have ever seen before and I find it pretty damn cool. I want to try other books set in it. I found it a shame that we only got to know a little bit of the world, because what we did get was utterly fascinating – especially the cultures since cultural worldbuilding is my absolute favourite. But I expect we will get to see more in book 2 and I am very much looking forward to that.

Recommended to: fellow folks with anxiety, anyone who wants to read about journeys, fans of Tess of the Road, those looking for a book that’s relatively small and personal in scope, those looking for a book without a romantic subplot, fans of cinnamon roll and/or trickster characters
Not recommended to: those who like their books a bit more eventful and fast-paced, those who love to call protagonists annoying/whiny/illogical

One thought on “Review: The Heretic’s Guide to Homecoming: Book One: Theory by Sienna Tristen”