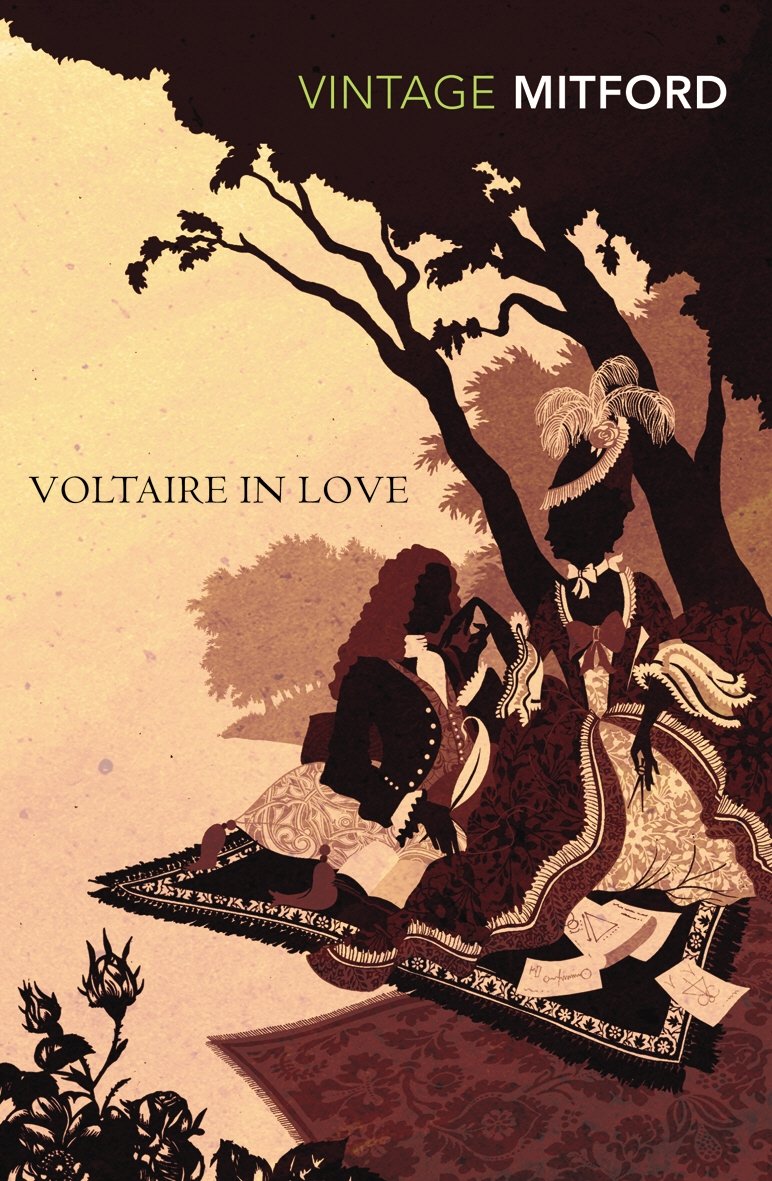 After asking an innocent question on Frederick the Great and Voltaire and receiving a laundry list of books in return (thank you, good to see SFF nerds aren’t the only ones with the habit of destroying TBRs), I decided to start at the less serious end. This is no scholarly, professional biography – Mitford doesn’t attempt to be objective or hesitate to pass judgements. But it’s an inceredibly fun read and I loved how it was written. Her style is dry, hilarious, gossipy, entertaining, and even though it’s showing its age in a few places and a couple bits did raise an eyebrow, it holds up shockingly well for something very nearly as old as The Lord of the Rings.

The first guest from the outside world to stay [with Voltaire and Émilie at Cirey] for any length of time was a twenty-three-year-old Venetian, Algarotti. He had decided that he wished to live among eminent folk and to this end had wisely acquired a knowledge of science which opened doors to him all over Europe. His attraction for both sexes did the rest.

The main focus is supposed to be the relationship between Voltaire and the mathematician Émilie du Châtelet up to Émilie’s untimely death. As such, it focuses less on their works and more on their incredibly colourful personal life. The result is an absurdist farce, and I was delighted.

Voltaire being Voltaire, a supreme attention whore of a writer, philosopher, and professional asshole who could dish it out but never take it, thrived on scandal, and suffered (literally, since his frequent entanglements tended to either ruin his always-fragile health or send him to prison or exile) from a chronic inability to shut up, is already everything required for a perfect, entertaining mess of a story. He could not stop himself from getting into increasingly ridiculous fights with authorities and other writers, usually both at the same time, and they all followed much the same pattern: he’d publish something inciting, get in trouble, make himself scarce (or, twice, get imprisoned), and upon return immediately resume his bullshit. It gets even worse once he had power to do something about slander. In short, a royal pain in the ass.

(Many a “oh for FUCK’S sake” was uttered. But then, swearing copiously at whoever you’re reading about is the fun part of history.)

Voltaire was allowed to go back to Paris at the end of March 1735. The Chief of Police, who had been at school with him, sent him this leave, and begged him, in future, to behave like a grown-up person.

You’d think Émilie would be boring in comparison and you’d be very wrong. She was one of the most well-educated women of that era – a scientist, philosopher, and gifted mathematician. I ended up rather liking her, and wanting to know more. Her translation of Newton is apparently still used today. She also had a gambling addiction and love affairs. Many love affairs.

Émilie got married to the Marquis du Chastellet at nineteen, had three children, two of whom survived. When he went away to war, she was left to do pretty much whatever she wished: study mathematics and sleep around. He didn’t care much for her intellectual pursuits or her intellectual friends, but he was not the jealous sort – later on, he and Voltaire were on friendly terms.  Even while she was with Voltaire, Émilie had other lovers, especially since he wasn’t much interested in sex. (And Voltaire also had a secret side affair with – yes, yikes, very much yikes, why the hell did Mitford try to excuse it? – his niece.) But strange and often sidetracked as the relationship was, there was never any suggestion of them breaking up, or not sticking up for each other – in a way, they were married in all but name.

I got a distinct impression that in 18th century France it was pretty common for upper-class men and women both to have an arranged marriage for status or connections and have various indiscretions on the side, which led to some absolutely ridiculous situations. It was certainly not just Émilie. There’s a very long, hilarious tangent about a certain Mme de Boufflers who was publicly the mistress of two men at the same time – an exiled Polish king and his chancellor (the king was old and thought he could not satisfy her, you see) – while secretly also screwing Saint-Lambert. The story goes that the king’s pet priest, unhappy with the most unchristian arrangement and not having much success with trying to guilt the king into dropping it, tried to break them up by inviting Voltaire and Émilie. All that achieved was Émilie becoming friends with de Boufflers and eventually hooking up with Saint-Lambert, who ended up getting her pregnant. Followed by Voltaire and Émilie hatching a plan to make the child legitimate by having Émilie lure her husband home to Cirey immediately and…well, you can imagine the rest. It ultimately ends in tragedy, as this is the pregnancy that caused her death, and the last chapter was awfully sad, but everything leading up to it? Incredible.

And then there’s the whole love/hate affair with Frederick the Great, the king of Prussia, which is what sent me down this road in the first place. In particular, hearing that even though she lacks some recent information (namely that Voltaire faked some of his letters to make Frederick look bad) and isn’t a historian, Mitford still has one of the best takes on their rocky, fascinating relationship because she doesn’t choose sides and understands they were both being dipshits. Which I’d agree with. I’m still not quite sure what Frederick and Voltaire had, the book ends way before it all blows up in a spectacular fashion and doesn’t include many letter excerpts. But whatever it was, it was messy.

…and I’ll end it here. There is, of course, even more anecdotes and I skipped some of my favourites, like the whole ludicrous episode with Desfontaines and La Voltairomanie, but I have already gone on long enough.

I am exactly the target audience. I like seeing historical figures as people, off the pedestals, and I’m especially interested in their fallible side. Even though most of what I read in the course of my obsession with the 18th century is serious (and I don’t feel up to reviewing those), I shamelessly admit that I’m an absolute slut for historical drama and “reality is stranger than fiction” anecdotes. Nobody could talk shit quite like people back then did. Everyone comes across as petty and neurotic and awful and over the top and I eat it up with a spoon.  Accuracy-wise, the book is not too great – since it’s from 1957, it’s missing the modern research/discussion and relies on some dubious sources – and I’d certainly recommend not stopping here, but it’s amazing at presenting history like a story, and very readable.

Next stop: her bio of Frederick the Great. I have been promised it’s even better.

Enjoyment: 5/5
Execution: 3.5/5 (points off for accuracy and datedness, not for style)

Recommended to: history nerds, fellow drama hoes, those looking for a light read or an introduction to the topic
Not recommended to: anyone looking for a serious or complete biography, those who can’t stand reading about awful people being awful or don’t care who was screwing whom

P.S.: Yes, I am eventually going to return to reading and reviewing SFF. But currently, I’m more focused on whatever I’m able to read and that’s not exactly much.

3 thoughts on “Review: Voltaire in Love by Nancy Mitford”