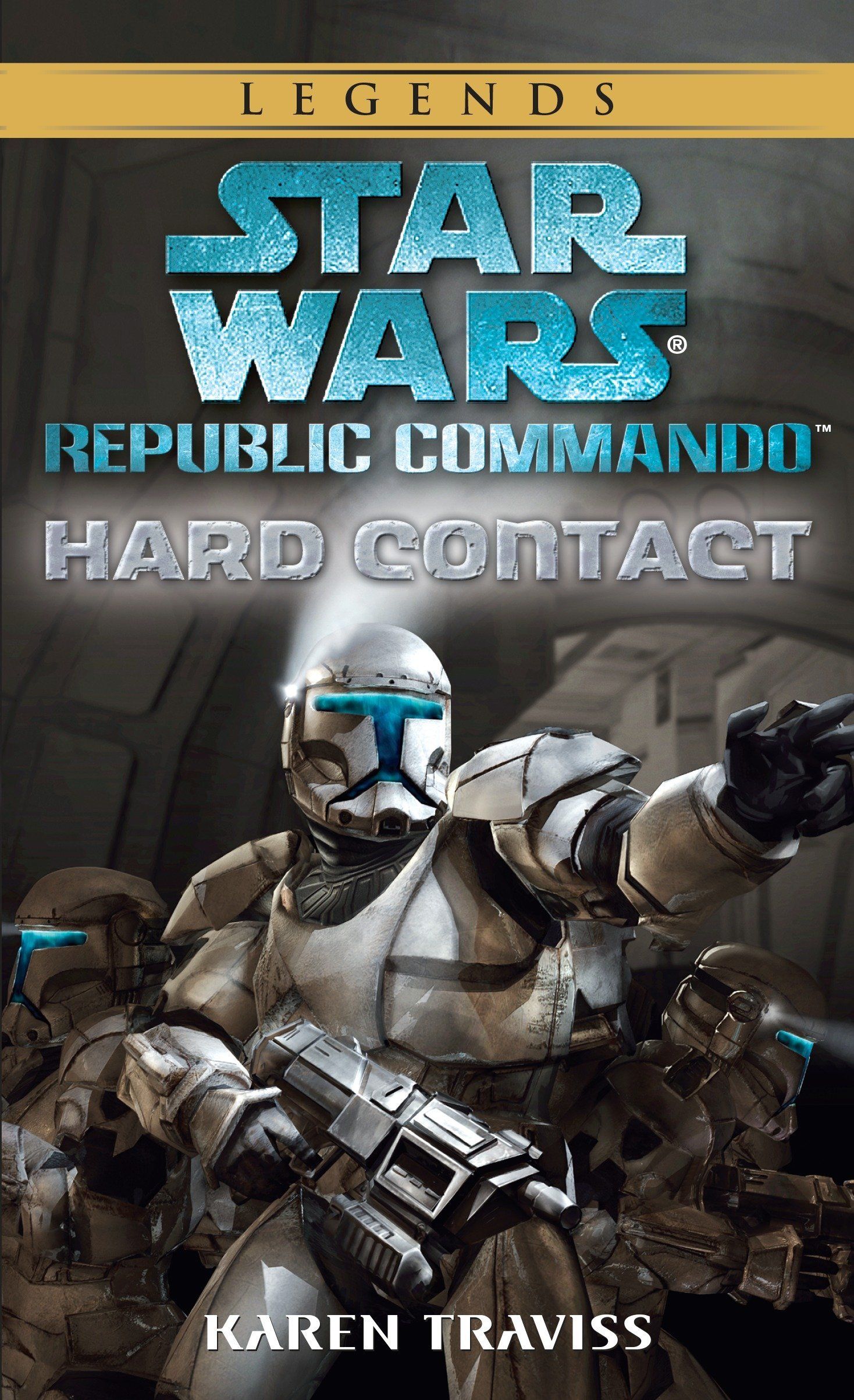 I admit, before I started my Star Wars binge I had more than a few prejudices about tie-ins (just ask all my friends who had to listen to me whining about the tie-in r/Fantasy Bingo square for months on end). I heard bad things about quality. And I just never saw the point. Sure I have played video games that had tie-ins before, but I’ve never really cared about video game lore. But Star Wars has left me with a few specific itches I desperately want scratched, no matter how, plus a desperate need for more. Tie-ins, fanfic, tv series, canon or non-canon, give me all of it.

Luckily, Hard Contact is a damn good book that went above and beyond my expectations. I came in for an easy read with clone troopers and Mandalorian culture (which it was!) and stayed for the thorough examination of how fucked up the concept of a clone army really is and the wonderful (at times even adorable!) interactions between the characters. In other words, it was an absolute delight and I can easily see myself devouring the rest of the series.

The plot is simple. Four clone commandos whose previous squad members were killed are assembled into a new squad and sent on a mission to destroy a facility where a virus targeting clones is being developed. On their way, they get separated and Darman has a run-in with a stranded, extremely inexperienced Padawan who is forced to become their commander because she is a Jedi and they were made to obey Jedi.

If you ever wondered why nobody in the prequels ever pointed at the clone troopers and started wondering how the Republic can still call themselves the good guys and do this, if you didn’t like how they were dehumanised blaster fodder…well, then this is definitely the book for you. As a call-out it’s downright brutal.

Traviss takes the concept of what happens when you use people as disposable to its logical conclusion. She doesn’t exactly have a delicate touch about it, she shows us first and then tells as well just to hammer the point home, but for once, I didn’t mind a lack of subtlety. I had to see someone notice the same issues I noticed, the point desperately had to be made, plus I have a huge weakness for stories humanising and giving voice to the faceless minor characters, and I got all of that in spades. Darman gets the most character development out of the bunch, with Atin close behind, but they’re all very clearly not identical. And they have a great dynamic. It reminded me a little of the Bridgeburners or the Bonehunters from The Malazan Book of the Fallen, another series that focuses on soldiers.

All of this goes double if you also want stories that don’t paint Jedi as flawless paragons. Etain, the Padawan forced into a commander role, is a wonderful character and I love her to bits. She’s woefully inexperienced, reeling from the death of her master, far from fully trained, far from the best Force or lightsaber user, and insecure about it all on top of it, but dammit, she tries her absolute best. She cares, perhaps too much for a Jedi. And she learns fast. Her interactions with Darman are oddly heartwarming and heartbreaking at the same time, and definitely the highlight of the book for me.

And then there are little snippets of Mandalorian culture interspersed throughout! Given my entry point into Star Wars, I have an obvious fondness for Mandos. Here it mostly shows up in two forms – the POV of the main antagonist Hokan, who is a Mandalorian, and the clone commandos themselves, who were trained by Mandalorians. Hokan himself is interesting, very much not evil for the sake of evil (and antagonists who are not evil for the sake of evil are awesome). He’s as disturbed by the concept of clones – of one of his own people, no less – as the reader, though obviously his solution to the problem is way too extreme. And he definitely doesn’t see them as people. But the motivation? The motivation makes perfect sense. Unfortunately, I thought he was a little wasted in the second half when his POVs stopped being as interspersed with his views and opinions and generally him as a character and became almost completely about tactics and exposition. But aside from that, and a rather unfortunate nickname for the Trandoshans used in one of the last chapters (see: content warning section below), no real complaints.

It’s just such a wonderfully character-focused book. Sure, there’s plenty of action and explosions. The writing style is very simple and straightforward and it’s not even remotely slow-paced. But in my reviews of the movies and discussion around them, I have gone on and on about how action is meaningless without slow moments that establish why you should care – and here the balance was perfect (though unlike with movies, I’m all about slow moments when it comes to books). I may be more than a little blind to its flaws, but what the hell. It entertained me, it provided the worldbuilding I wanted, it made me think, it even broke my heart a little. What else could I ever possibly want?

Recommended to: fellow Star Wars fans who don’t care about canon, anyone who thinks the Mandalorians are cool, those who wondered if nobody in the prequels saw how fucked up the concept of clone troopers is, fans of military SFF, the found family trope, or character-focused books, anyone looking for a fast and easy read, those who wonder how can a book manage to combine “fucked up” and “adorable”
Not recommended to: those who dislike the idea of Jedi being flawed, those who dislike made-up swearwords (though to be fair, at least Mando’a is a proper conlang), plus see content warnings below

Content warnings: Attempted rape at the beginning. Also, it contains an extremely unfortunate nickname for the Trandoshans that is very similar to a slur. It only appears in one scene near the end and I genuinely believe it was not intended to offend or cause harm (besides, the book was published in 2004) – which is why I did not reduce the rating – but it threw me out of the story and deserves a strong warning for those who require it regardless.