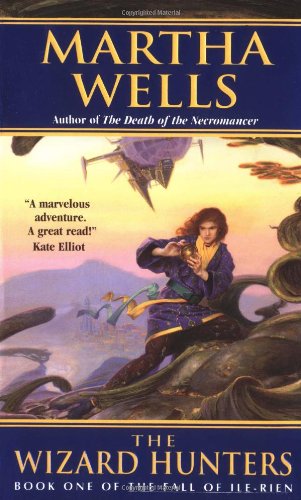 Initially picked up because of the Bingo challenge, I hoped this would be a good fit for a difficult square. And while the world is interesting, I found the The Wizard Hunters boring almost to the point of DNFing it. I have no idea why I persisted.

The book is initially split into two storylines. In the first, Tremaine, a playwright, is contacted by a group of sorcerers because she possesses the last magical sphere that could help Ile-Rien in the war against Gardier, a nation of people who attacked suddenly and with seemingly no reason. The sphere doesn’t work without her presence, so she’s dragged along on a dangerous adventure. Then we also follow Illias and Giliead as they explore a cave occupied by evil wizards. The storylines eventually converge, though the beginning was quite confusing – I felt like I was missing out on a lot of context.

The worldbuilding is where it should have shined. I haven’t seen a secondary-world book that combined electricity and magic before, or one that would contain contact between two civilisations on very different technological levels. And I love books about culture clashes. By all means, it should have worked.

Unfortunately, it’s a colossal yawner regardless. It’s quite hard to put a finger on why, too. The prose is of the unremarkable windowpane kind (could not find a single quote), but this alone shouldn’t have been so bad. I think the biggest problems are that I couldn’t connect to any of the characters – they all seem quite bland and two-dimensional. The book tells us that Tremaine is suicidal, but it doesn’t really show her mental health issues or discuss them much (and that it turned out to be magic put a bad taste in my mouth). And the Gardier come off as the standard evil-for-the-sake-of-evil. The plot…well. I found the sphere a bit of a convenient deus-ex-machina at points, and most plot twists predictable. It definitely doesn’t reinvent the wheel.

It’s really not a bad book. It doesn’t have many glaring flaws. But it didn’t have many virtues either, and definitely nothing that would make me excited about reading on – the above paragraph feels like justifications for the simple facts that I was bored, and it was a chore to read. Aggressively mediocre, I suppose, is the term. Anyway, I’m unlikely to continue the series.

2 thoughts on “Review: The Wizard Hunters by Martha Wells (The Fall of Ile-Rien #1)”